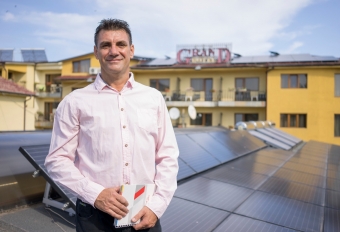 Gheorghe Popescu Romeo administers a group of hotel and restaurant situated in the resort city of Eforie Nord. He started his company, Mini Braseria Grand, in 2000, when only the restaurant was operating. After investing in and modernising it, he decided to acquire two buildings in which to make hotel rooms. His relationship with ProCredit Bank started in 2006, when he received a loan to rebuild the hotel after a fire. After that, he received two more loans from ProCredit Bank, the last one in 2013, with which Mr Popescu acquired photovoltaic panels for the restaurant’s roof.

The decision to make this investment was motivated by the fact that the energy supply was not steady, which sometimes made it hard for the business to run smoothly. At the moment, there are 126 photovoltaic panels and five solar panels on the roofs of his buildings. The advantages of the investment followed quickly: the energy supply problem disappeared, while energy consumption decreased by approximately 60% for the restaurant, where most of the panels are installed. Moreover, as a green energy producer, Mr Popescu is in the course of becoming certified to deliver electricity to the national grid.

“The evolution of my business is also due to my relationship with ProCredit Bank, which supported me by approving three loans. I also appreciate the fact that my requests are met with quick responses and that the bank takes a personalised approach to working with its clients, which has played an important role in the successful collaboration we have developed over the years.“

The success of Mini Braseria Grand has encouraged Mr Popescu to make future plans; for example, he is thinking of adding another storey to the hotel. At the same time, Mr Popescu encourages other companies to invest in renewable energy projects.

“Green energy presents certain advantages for consumers because it is cheaper and you can deliver surplus energy to the national grid once you are certified. Moreover, installing such panels is a viable solution for covering the energy consumption required by the business, a benefit that I was able to enjoy only one year after the investment.“